At Peachtree Road, we believe that our Sacred Space should Live and Breathe; and we take Psalm 57:7 to heart.  "My heart, O God, is steadfast, my heart is steadfast; I will sing and make music."

The 2018 -2019 Series promises to be be more dynamic than previous years! It begins with Pianist Andres Bayles and Cellist Guang Wang in concert - Sunday, September 16th at 3:00p.m. followed by world renowned organist, lecturer and author, Dr. Eileen Morris Guenther in concert on Sunday, October 7, 2018. 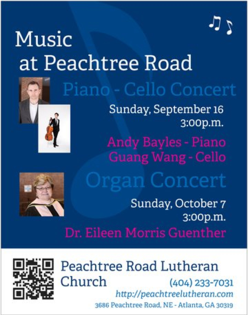 Andrew Bayles is an active freelance pianist and accompanist, arranger, vocal coach and conductor based in Atlanta.  When not traveling, performing, or serving churches, as Artist-In-Residence, he utilizes the Sacred Space at Peachtree Road for practice, recording and concerts.  His work has taken him around the world and has received countless honors and accolades.  He recently won top production with the Atlanta Opera's "24 hour opera project," as both a composer and as a music director/accompanist and  founded The Kellett Chapel Recital Series at Peachtree Presbyterian Church.  Other notable engagements have included work with The Atlanta Symphony Musicians Foundation, The Atlanta Opera, The Vega Quartet, The Peachtree String Quartet and countless world class singers and instrumentalists.  More information on Andy may be found at http://www.andrewmbayles.com

He put a song in my mouth, a hymn of praise to my God.

In August of 2017, the congregation of Peachtree Road was honored with the opportunity of acquiring a 6'3, 1903 Bluthner Grand Piano from an Atlanta area estate.  Upon acquisition, it quickly became apparent that the, over 100 year old instrument, which had once been magnificent, needed attention.

Thru the support of the congregation and a significant family contribution, in September of 2017, the instrument entered into a year long, complete restoration process, designed to restore this instrument to its world-class state.   Since 1853, Blüthner pianos have been exclusively manufactured in Leipzig, Germany. To this day, the Blüthner family of craftsman and entrepreneurs continues to head the Blüthner firm and personally oversees the production of each grand, upright and digitalpiano bearing their name. They carry on the legacy of the founder, Julius Blüthner, to build the best pianos in the world. The highest standards of precision and craftsmanship have been achieved here for over 160 years.

Today, the stunningly beautiful Bluthner Grand not only leads worship at Peachtree Road, but also is used in the educational process at Peachtree Road Lutheran Pre-school, but is also a sought after instrument for concerts and recitals for artists from Atlanta to New York, to California.

Hila graduated from Georgia State University in May of 2017 with her Master’s in vocal performance. In the summer of 2017 she performed the role of Monica in The Medium at the Lefkas Music Festival in Lefkada, Greece. At Georgia State, she performed the roles of Donna Elvira in Don Giovanni, Queen of the Night in The Magic Flute and has performed partial roles such as Susanna from Le nozze di Figaro,  Clorinda from La Cenerentola, and Phyllis in Iolanthe. During the summer of 2016, Hila performed the role of Amore in L’incoronazione di Poppea at the Harrower Opera Workshop, as well as the partial role of Olivia in Joel Feigen’s new opera Twelfth Night. In the summer of 2014, Hila participated in Middlebury's German for Singers Program, an intensive German language immersion and opera program at Middlebury College. There, she performed the role of Despina in Cosí fan tutte. Originally from the Washington, D.C. area, Hila was a frequent performer with local opera company, Bel Cantanti Opera.  She has also performed scenes as Adina from L’elisr d’amore, Rodelinda from Rodelinda, and Ginevra from Ariodante. She has previously studied voice in Salzburg, Austria with the University of Miami's Frost School of Music. Hila continues to audition and perform all around Georgia and the United States. She currently sings with the Atlanta Opera chorus,  and regularly studies with Rick Clement.  She has served as Choral Scholar  and Soprano soloist at Peachtree Road since April 2017. 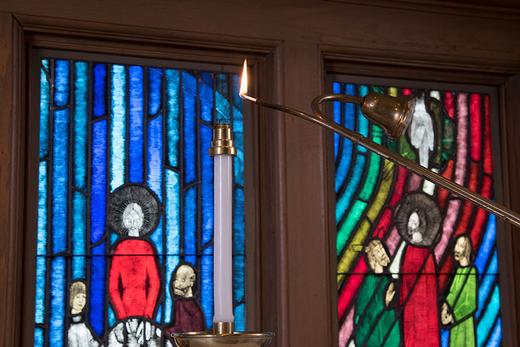 Music at Peachtree Road is as dynamic and diverse as our congregation.   Sunday mornings may begin with an opening voluntary from our Pipe Organ, Harp, Piano or stunning meditations from a Guitarist and lead us in ushering the People of God to the Throne of God.

At PRLC, when we say "Everyone Is Welcome", we mean it! The worship experience at Peachtree Road, while Liturgical in design weaves elements from many Faith Traditions, to assure that everyone feels at home.

In our Traditional Worship Experience, you may find yourself listening to and participating in a Gregorian Chant, Majestic Hymns of Faith, Spirituals, Appalachian Folk Songs, and Contemporary Solos and Responses from our Choir and Soloists.  Sunday Mornings at 11:00 find the Sanctuary bursting forth with the sounds of celebration, led by our Chancel Choir and our professional Peachtree Road Music Scholars;  world class vocalists from the Atlanta area currently furthering their education and musical careers. 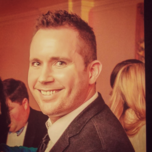 A fifteen year member of the Peachtree Road Choir, Hans began his musical training in high school, singing in choir, glee club and Madrigals.  As he continued his education, his dedication to music followed, both at Emory University, Atlanta, GA  and at Westminster Choir College, Princeton, NJ.  As Bass section leader at PRLC, his love of music transcends both traditional and contemporary; not to mention an occasional visit to bar church.

After having dealt with the struggles of the aging Wicks Pipe Organ, in 2018 the congregation began the journey of discovery to repair and enlarge or replace this well loved instrument.  The final decision was to create a hybrid instrument that would, not only significantly enhance the worship experience, but also create a venue appropriate for recitals and concerts in the Buckhead neighborhood.

This process has three phases: Replace the two-manual Wicks console with a three-manual, state of the art console, to add an additional 57 Digital voices and in the final stage to re-voice the antiphonal nave ranks of pipes and incorporate them into the new instrument as the Positif division.  Phases one and two are scheduled for completion in August of 2018 and phase three is currently prepared for.

In the new instrument, The Great, Pedal and Choir divisions speak from the front of the chancel, directly into the nave to enhance congregational singing and more directly support the choral program.  To facilitate this, new pipe facades are added into the altar area.   The Swell division will speak from the former Chancel division organ chambers, housed in the ceiling above the chancel.

The new console, designed with both worship and concert in mind, maintains complete mobility anywhere in the chancel area as required.